The Fox, 19 August 2018: Let it be Me, as recorded by the Everly Brothers in English and Gilbert Becaud in French.

Proud Mary, a cover of the Creedence Clearwater Revival version, performed by us at the Fox in March 2018

Sloop John B – not strictly a live performance, but a recording made during a practice session in March 2018 of the new singing group, Adrian, Chris and me. We performed this song at the Fox, Hanwell in February 2018.

A concert put on by my jazz singing class organised by teacher and immensely talented singer Natalia Kawka. 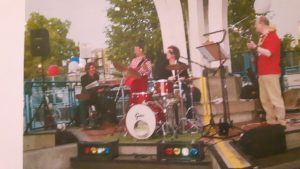